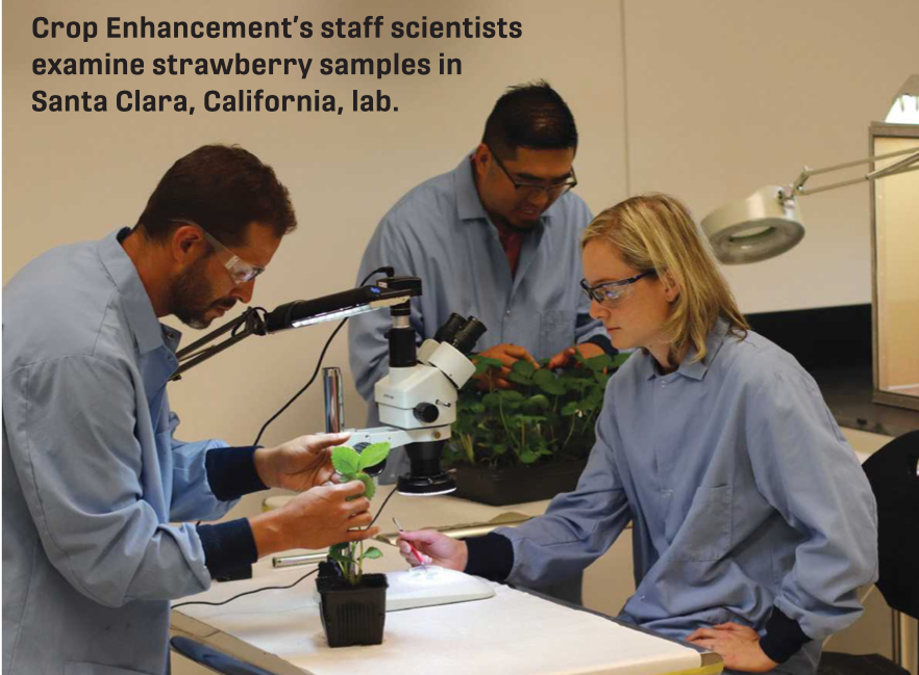 From mating disruption to sterilized insect technology, biologicals and pesticides, navel orangeworm has been the subject of a great deal of research into mitigating and/or eliminating the pest. Aside from the technologies and chemistries themselves, there’s an environmental sustainability factor that is quickly jumping to the forefront of industry. In addition to the current options, a new alternative is making its way onto the scene and yielding intriguing results.

Crop Enhancement, based in San Jose, California, and founded by chemical engineer David Soane in his Soane Labs incubator, is gearing up to commercialize in the U.S. a unique product called CropCoat – an organic, non-toxic alternative for the control of navel orangeworm (NOW) that doesn’t actually act on the pest, but on the pest’s environment.
What CropCoat provides is camouflage.

A different mode of action

Growers won’t need any new or additional equipment or protective gear in order to use CropCoat. Like other crop protection products, CropCoat is mixed with water and sprayed onto the trees. The droplets coalesce, and once the water evaporates, the product remains as a biodegradable coating and essentially masks the nuts from navel orangeworm. The pest doesn’t recognize the coated surface as something it wants to eat, which can cause starvation, nor a place to reproduce, which can cause the population to collapse.

“It’s a very unique way of working,” said Jean Pougnier, CEO of Crop Enhancement. Pougnier spent most of his career at DuPont before moving to Crop Enhancement about one and a half years ago.

Over the last few years, Crop Enhancement has trialed CropCoat in multiple crops, and found it reduced NOW damage in almond by 40% compared to untreated trees. What this means to growers is the prevention of several hundred dollars per acre in economic losses.

Though the research plots were relatively small and contained roughly 30-50 trees, there were also some additional surprising and beneficial discoveries. In addition to preventing NOW damage, there was also evidence of a decrease in mite pest populations, which Pougnier called “a big plus.”

“They’re really research plots to try to understand how CropCoat acts against the grower standards and also against untreated plants,” said Pougnier.

There is also early evidence of protection against alternaria. And though research isn’t yet targeted to CropCoat’s effects on alternaria, Pougnier noted that it is nonetheless interesting and a good sign of what CropCoat can do.

In trials in coffee in Hawaii and both Central and South America, the damage caused by a major coffee pest – the coffee berry borer – was reduced by 60%. In cocoa in Indonesia, where the product is commercially available, trials showed a 33% boost in yield, according to a news release. The company also has plans to trial CropCoat in brassicas, leafy greens, apple and other crops, including additional tree nuts.

Trials in pistachio begin this year, with walnut trials to follow thereafter. This has the potential to be a sigh of relief for growers of multiple nut crops – and growers of multiple crops, period – who could use one product across all their commodities. While most of the research has focused on insect pests – and, particularly, navel orangeworm in almond – the team at Crop Enhancement has also seen some activity against aphids, white fly, leaf miner, a number of borers and other insect pests in a variety of crops. And while there hasn’t been much research into CropCoat’s effect on disease, in addition to the activity against alternaria, there is similar evidence for the product’s effects on phytophthora, powdery mildew and rust.

“It’s very exciting and would create tremendous value to the grower if one product could control all these pests,” Pougnier said. “But, still, a lot more work needs to be done to prove that out.”

There is also always the question of pests developing resistance.

Since CropCoat doesn’t act on a particular pest, but rather changes the environment to make it unrecognizable, pests must move on to someplace else or risk dying slowly.

“You can never say never,” said Pougnier, “but we don’t expect any resistance. We’re creating a new approach of safer, biological-based crop protection.”

A single application of CropCoat can last up to six weeks, and the product complies with stringent sustainability programs. The product is currently only available in Indonesia, with the U.S. immediately next on the list, and where the label will include a variety of crops in addition to tree nuts, including apples, grapes, berries, cucurbits, broccoli, tomatoes and spinach.

Crop Enhancement will file for registration in almond in June, with an expected approval date in late 2022, so that the first commercial sales in the U.S. can begin in 2023.