How China can support its increasing demand for organic, fresh, and safe food

China’s government has set ambitious goals to improve the sustainability of its vast agricultural sector. But farmers won’t adopt sustainability practices unless new technologies also increase their profits. Meanwhile, important factors are intensifying the urgency of the problem in China:

As consumer demand for fresh foods in China grows, new innovations are needed to help farmers save money, improve sustainability, and build trust with a more environmentally conscious middle class whose food tastes are increasingly resembling those in Western cultures.

The path to sustainable intensiﬁcation in China
Agricultural reforms introduced during the 1980s improved food security in China. However, the country’s rapid adoption of modern inputs came at a significant cost to the environment. Today, Chinese farmers apply synthetic pesticides and fertilizers at much higher rates than other developing countries, even as runoff from degraded soils causes signiﬁcant damage to water and air quality. This chart from a recent Bloomberg News report highlights the problem::

The rise in synthetic fertilizer and pesticide use in China can be partially attributed to the country’s growth in fruit and vegetable production in recent years. Beijing is beginning to take steps to support alternate production methods. In early 2017, the government announced several new initiatives to promote “green” farming practices and increase domestic production of high-quality fruits and vegetables while maintaining its goal of zero growth in the use of fertilizers and pesticides by 2020. 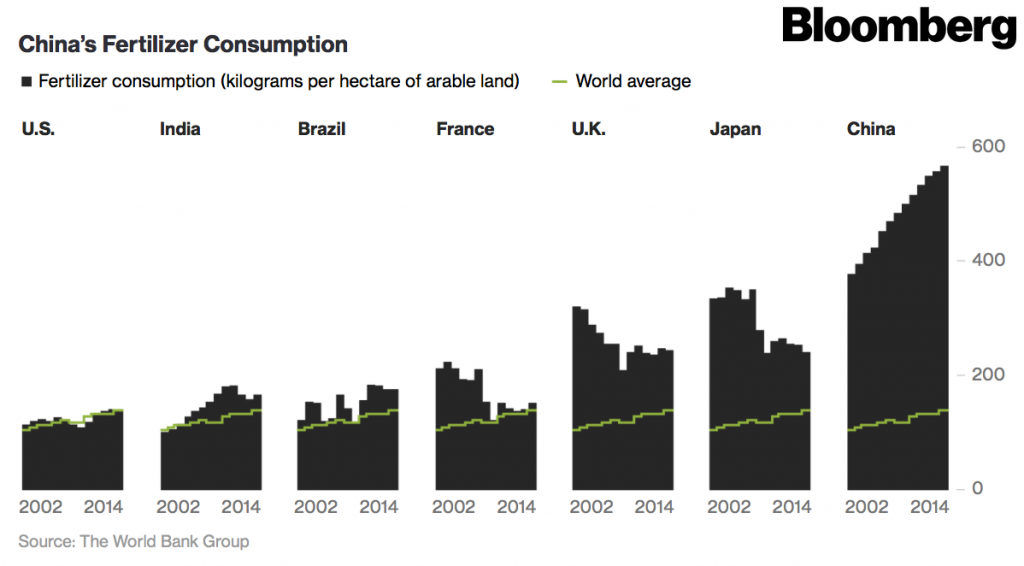 New consumer values: organic, fresh, safe
Urban consumers aren’t waing for the government to deliver on its promises. Trust in domestically produced food remains low after a series of highly publicized food-safety scandals. Many Chinese shoppers are willing to pay a premium for safety, freshness and variety in their diets. The market is responding dramatically to cater to consumers’ obsession with the origin of their food. Surveys show a huge preference / pricing premium for organic. For example, consumer excitement surrounding food that can be traced to a speciﬁc greenhouse (and the fact that they want to oﬀer tours to show the world), the weird social media explosion about fake seaweed, and Walmart talking about using blockchain in China to trace pigs, chickens, etc.

In recent years, e-commerce has expanded markeng and distribution channels beyond brick and mortar, with major players such as Yiguo and Tmall Fresh using new business models to connect shoppers with the food products and brands they trust. A 2016 Euromonitor report shows that almost 50% of Chinese consumers have purchased food online, with signiﬁcant growth expected in the coming years.

New innovations can reduce pesticide use and save farmers money
China is rushing to deploy new technologies that support farm income and minimize damage to the environment. Nowhere is this more necessary than in China’s fresh produce sector, which depends heavily on synthetic pesticides.

One new approach that offers a solution to boosting yields of sustainably grown crops comes from my company, Crop Enhancement, a California-based startup that helps farmers sustain high yields while reducing their pesticide exposure. Drawing from deep expertise in materials science, Crop Enhancement has developed a non-toxic, biodegradable film that coats plant surfaces such as leaves, stems, and fruit to reduce the need for harmful pesticides. The product, called CropCoat, can be applied on its own as a microlayer to trees, thereby helping improve crop quality and yield while reducing the frequency of pesticide applications throughout a growing season. CropCoat can also be combined with biological controls such as beneficial bacteria, fungi, and viruses to broaden the pest management toolbox.

It will take ongoing partnerships between agriculture technology companies, food manufacturers, and non-governmental organizations to bring safer, sustainable agricultural practices to the smallholder. But the opportunity for innovative, effective, nature-derived crop protection in China is huge. Beyond offering growers of crops such as citrus, cacao and coffee a way to minimize or even eliminate the use of pesticides while improving yield, field-level technologies can address two key challenges in China: increasing food production and fostering the development of sustainable agricultural practices that are environmentally friendly and economically viable. Chinese consumers are increasingly eager to participate in this effort.