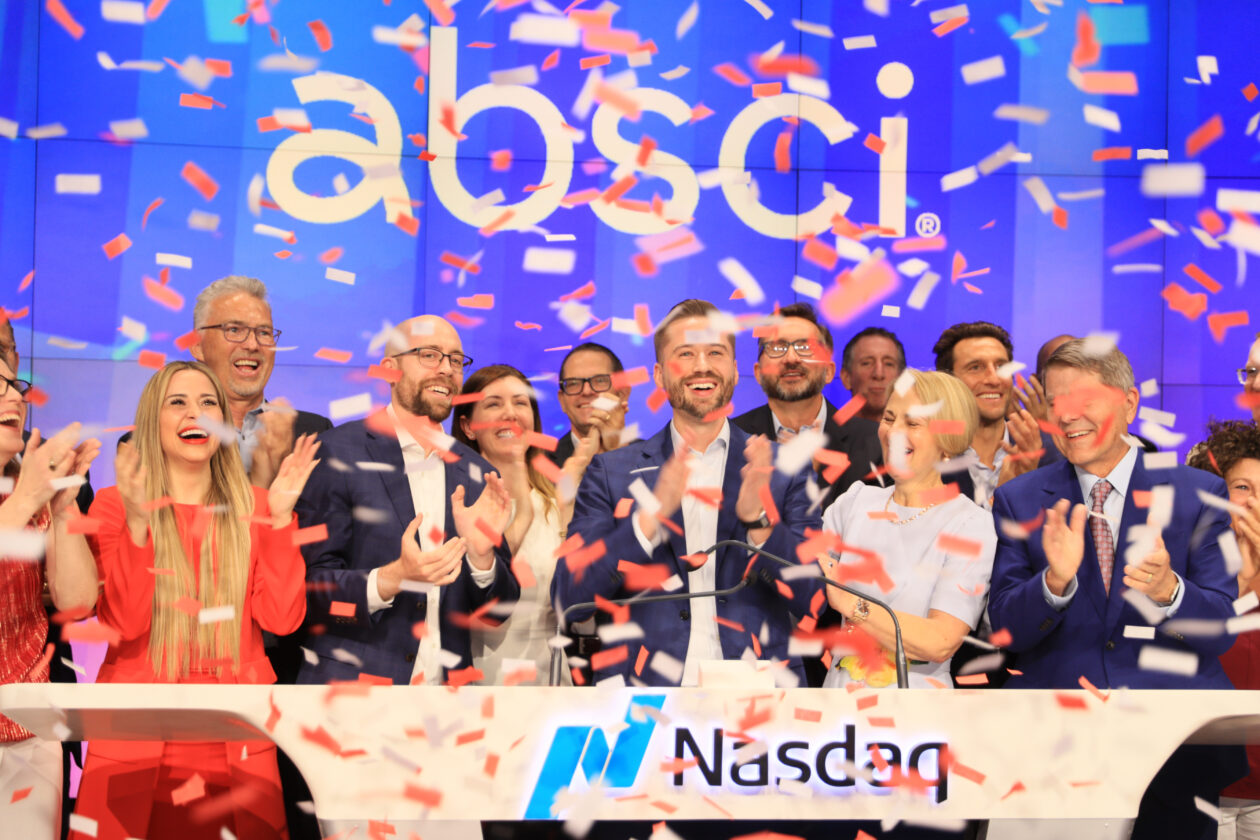 Biotech CEOs tend to have advanced degrees and multiple academic credentials under their belt. But Sean McClain started Absci as a freshly minted grad from the University of Arizona at age 22, living with his parents and working out of a basement lab.

Absci ended the day with shares up 35% from its opening price on the company’s first day on the NASDAQ. The Vancouver, Wash.-based drug development platform company has a market capitalization of nearly $2 billion.

The vision for Absci started when McClain worked for protein researcher Kirsten Lampi, a professor at Oregon Health Sciences University. It was in Lampi’s lab where McClain learned how to purify proteins from E. Coli,  spawning his ideas for the company.

“I had this crazy idea and this obsession with synthetic biology and how we could be making protein-based therapies at much cheaper cost and get them to market a lot quicker,” McClain told GeekWire Thursday, just before ringing the closing bell.

Absci optimizes the designs of protein-based drug candidates in silico, and uses custom-engineered strains of the bacterium E. coli to manufacture and screen them. The company now has several drug company partnerships, including with Merck, which also supported the company through its venture arm.

McClain got some of his first hands-on lab experience working with Lampi. “My fascination with producing proteins in her lab is really what led to me designing a new E. coli strain to produce monoclonal antibodies,” a hard-to-make type of biologic drug, said McClain.

Recalls Lampi: “What he saw in my lab was a process that was slow, and he saw what he thought was a market for it.” She added: “He knew that he could hire people with the expertise, and he had a vision to get there.”

Lampi recalls that in the early days, McClain kept some of his ideas, “very close to his chest.”

“I would say more than a scientist, he is a businessman. He is driven,” Lampi said.

McClain has built up Absci to more than 170 employees and the company is expanding into a new 78,000 square foot campus near Vancouver.

McClain envisions that Absci will ultimately become the “Google of synthetic biology,” he said.

His company started off engineering E. coli to produce complex mammalian proteins, generating attributes such as the ability to better fold proteins into three-dimensional shapes. That led to a more developed platform to generate and screen protein drug candidates. Absci built on that capability this year with the acquisition of acquisition of synthetic biology company Totient and Denovium, a small deep learning startup that analyzes protein function and behavior.

“What I had discovered back in the day is still fundamental to what we are doing, but it has blossomed into so much more,” McClain said.

McClain said he knew he was taking a chance founding a company as a young entrepreneur, but he figured he could always go to graduate school and build up more academic credentials if it didn’t work out.

A fan of the book “Grit” by Angela Duckworth, McClain credits Zach Jonasson, managing general partner at Phoenix Venture Partners as a mentor. “He has taught me so much, it’s all about being a sponge,” and learning and questioning each day, said McClain. Phoenix Ventures led the company’s Series A round in 2016 and was the company’s largest shareholder prior to the IPO.

McClain also credits his dad with much of his success. When he was 10, he wanted to buy a video game, but his dad told him he’d have to earn the money. He started mowing his neighbor’s lawn. And though he never bought the video game, he earned enough to buy his first truck, a second-hand Ford Ranger stick shift, and pay part of his college tuition.

Today, McClain’s dad Rick was with him as he rang the closing bell on the Nasdaq stock exchange. “We both got really emotional,” the CEO said, “just seeing where Absci started and where it’s at today.”