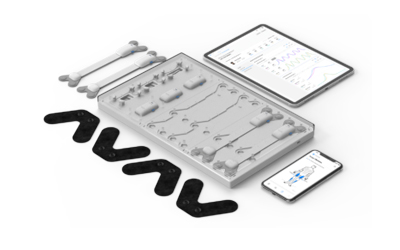 As a PhD student focused on sensor design at MIT’s Media Lab, Nan-Wei Gong worked frequently with the local Major League Baseball team, the Boston Red Sox. Through this collaboration, she couldn’t help but wonder why the team had access to a host of equipment — and professionals — to diagnose and predict musculoskeletal injuries, while for the average person, herself included, such care came in the form of a simple exam or questionnaire despite these injuries impacting a predicted 1.7 billion people worldwide, according to the World Health Organization. “Today when you go to the doctor, if you have a neck injury, they will ask you to measure the range of motion, the doctor will put three fingers on the shoulder. Like what are three fingers going to tell you?” Gong tells Forbes. “[Doctors are] basically using their hands to feel the muscle health. These types of exams are very subjective and that leads to a variation of care.”

Gong, who has spent most of her career in the wearable space — she formerly founded and sold a sensor company, 3dim Tech — thought there must be a way to bring the level of care that athletes receive for these injuries to the average person, without the expense and location restrictions associated with a larger procedure like an MRI. Naturally, she turned to sensors. She launched FIGUR8 in 2017 as an MIT spinout startup, based on research the MIT Media Lab had been collecting since the early ‘90s and in collaboration with Mass General Hospital. FIGUR8’s portable health tech systems use a combination of sensors, AI, and software to better pinpoint where an injury has or may occur. A patient
wearing its sensors performs a series of movements, while its AI-enabled software uses the data to produce a full musculoskeletal model. “Multiple joints, multiple segments, we capture them digitally and in a few minutes a full musculoskeletal image can be done by anyone and anywhere,” she says. The technology is now used throughout healthcare institutions, sports teams and even insurance companies like auto-focused MAPFRE, and the startup is raising fresh capital to keep expanding.

The Boston-based company raised a $12 million Series A round led by Taiwania Capital, as originally reported in Midas Touch newsletter, with participation from MIT E14 Fund, P5 Health Ventures, Phoenix Venture Partners and former NBA 2018 first-round draft pick, Mo Bamba, who is a user. Habib Haddad, a managing partner at E14 Fund, says the company’s mission resonated with him instantly as someone who has struggled with knee problems for the past few years. He adds that he ran out of physical therapy appointments covered by his insurance before he knew if he was even making progress on his injury and that he had wished he had access to FIGUR8’s tech at the time. “[Physical therapists] give you an exercise regimen but you don’t know if you are improving or not,” he tells Forbes. “FIGUR8 allows you to see that you are getting better before you start to feel better.”

Gong says the round will help the company expand its product offerings to include diagnostics for the lower back, lumbar and knees; it’s focused on the back and neck since its 2019 product launch. Gong adds that the tech’s benefits span further than just each patient too, as it also allows data to be collected on musculoskeletal injuries in a novel way, making it easier to track how long different injuries take to recover, how these injuries occur, and how some could potentially be prevented, which has drawn in some of their less obvious customers like MAPFRE or Fortune 500 corporations. The company is actively working with these groups because such data can prove vital. For companies that face workplace injuries, like potentially at Amazon, where Jeff Bezos recently mentioned that musculoskeletal injuries were the most common among warehouse workers, the data could eventually help companies figure out how to train employees to avoid certain catalysts for them. For insurance companies, the data can help them create more accurate policies for their clients’ injuries and Gong thinks the list will grow from there. “This is just the beginning of understanding how musculoskeletal health and recovery data can be leveraged, starting from cost savings [for companies] and the next step is helping customers at risk,” Gong adds. “We believe that FIGUR8 will become the default tool for this category in the future.”